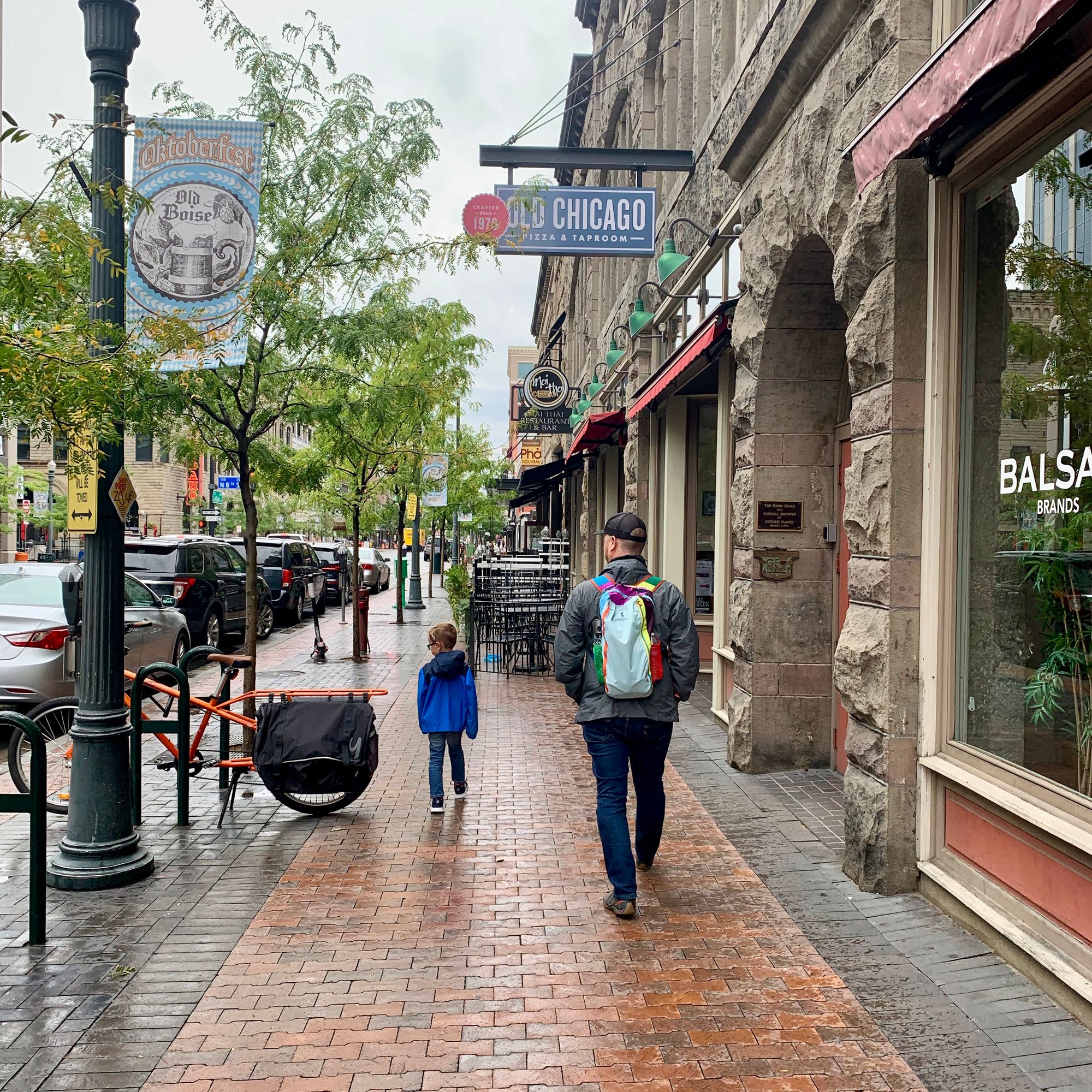 We left Portland a couple days early to visit family in Bend.  My cousin and her family have lived in Bend for 15 years.  We have visited them before, so we already knew that we loved this place.  The drive from Portland to Bend is picturesque.  The road passes through miles of bedrock which you can tell were carved from flaming hot lava flow millions of years ago creating giant gorges and plateaus of colorful rocks.  The Deschutes River flows through the valley at the base of these rocks making the landscape much more soft and peaceful amidst the sharpe-edged, splintery rock formations.  Unfortunately I didn't stop along the way to take any pictures.  We had gotten a late start that day and were anxious to get there.  You will just have to take my word for it, it was gorgeous.

Bend is the epitome of outdoorsy.  Everywhere you look folks are cruising around in Columbia and Patagonia gear with bikes, kayaks and paddle boards strapped to the top of their Subarus.  We started our Saturday off early, throwing on our Columbia and Patagonia knock-offs and hitting the trails along the Deschutes River for a run with a local tour guide, our cousin Morgan. Rather than go into a long description about the beauty of these trails, just take a look for yourself.

After the trails we threw the paddle boards on the car and headed down to the Deschutes for Jamie and I's first ever paddle board experience.  We hit the river, stood up immediately and began paddling upstream for the next hour.  What a nice workout.  It's the best combination of a leg, core and arm workouts while still being completely relaxing.  We loved it.

At this point we were really starting to feel like true Bend locals with a run and a paddle in the books by 2 p.m.  Morgan explained that many Bend residents will congregate in the evenings boasting about the line up of outdoor activities they had completed that day.  We pondered what we could do to make this day into a trifecta of outdoorsy events which we could brag about at our get together later that evening. We landed on the boys going to the brewery and arcade and the girls jumping in the sauna for a steam.  That's about as close to a Bend trifecta as the Wagabonds were capable of.

The rest of the night was filled with food, drinks and wonderful company, followed by a wild ride on the Matlock's golf cart equipped with off-roading wheels.  We made frequent stops to gaze at the stars in amazement.  You could literally see every single constellation and then some in the night sky.

The next morning we said our good-byes over the best damn breakfast east of the Deschutes River.  If you are in Bend, the McKay Cottage Restaurant is a must.  Get whatever is on the menu, it's all fantastic.  But whatever you do, get a side of the Lemon-Ricotta pancakes for the table to share, you will not regret it (well, you might just a little when you're too full to drive to Boise right away, but get them anyways).

We came, we ran, we paddled, we brewed, we steamed, we partied, we stargazed and we stuffed our faces.  Bend, you did not disappoint.  Matlock family, thank you and we love you!

Ok, if I'm being 100% honest we were a little underwhelmed with Boise when we first arrived.  It didn't help that we got here at nearly 11 p.m. after getting a late start out of Bend (no thanks to those Lemon-Ricotta pancakes) and checked into an underground basement apartment, which felt more like a bunker.  Not to mention, settling for Burger King out of pure necessity, since nothing else was open at that hour.  None of these things make for a great start.  Also, coming from a house in Portland that was arguably better than our rental back home, this was a hard transition.  I also may have been a hard sell on anywhere at this point coming from Portland since it is one of my most favorite cities.  In any case, all we needed was a good night's sleep and a reset.

We arrived the night before Labor Day and woke up Monday morning with high hopes for Boise.  My plan was to go float the river on an inner tube, but Jamie wanted to explore the city instead.  I should have been a little more pushy about floating the river because we later found out that the last day of the season to float the river is Labor Day....aaaaand we missed it (you may be sensing the tiniest bit of resentment over this mistake...but I digress).  The town of Boise was like a ghost town on Labor Day...understandably, well, because it was Labor Day and everyone was probably floating the river (my last dig, I swear).  It was actually refreshing to see so many businesses closed on the one day we are supposed to be honoring our country's laborers.  The OC and LA area rarely shut down for anything.

Fast forward, one week in, and we are feeling different about this cute, under-stated, little city.  We couldn't have chosen a better part of town to stay.  Boise's North End is a historic district filled with turn-of-the-century style homes and tree lined streets which have a charm reminiscent of the south. The tree dense neighborhoods are home to families of squirrels which can be seen scurrying about, chasing one another and eating acorns at all times of the day.  They very well may be a nuisance to the residents but Quinn and I were thoroughly entertained by them everyday.  They also still do milk deliveries in this neighborhood which I thought was a thing of the Norman Rockwell past.  We loved walking the streets of Boise's North End.

The main recreational area here is Camelback park.  A sprawling green belt backed up to a hill scape that looks like a camel's hump.  The park has enormous stone steps which takes you to the top of the hill where you can see breathtaking views of downtown.  The back end of the park is filled with miles of trails.  This park was wonderful and served as my gym for our two week stay.

The downtown area of North End is known as Hyde Park and was perfect walking distance from our place.  There were some pretty wonderful places to eat and shop in Hyde Park.  We loved  G. Willikers Toy Store (I mean how good is that name?) and right next door to G. Willikers is an old-timey candy store and soda fountain called Goody's (how Norman Rockwell is that?).  As far as restaurants go, you can get your pizza fix at North End Pizza and if you have a hankering for a burger, 13th Street Pub and Grill is your go to.  There are two great coffee houses in Hyde Park.  One is called Java and the other one is Hyde Perk.  Both are great for different reasons but one thing they had in common was their friendly staff.  They even had little picture cards of the staff on-duty which serves as small introductions of the employees working that day.  I've never seen something like this before, and I liked it.

Downtown Boise has a lot to offer. Turns out it's home to the largest population of Basque outside of Spain....who knew?!  When in Boise you have to make your way down to the Basque block and grab yourself some tapas or traditional sandwiches.

We loved Bar Gernika! The food is reasonably priced, the Spanish wines were great and the croquettes were like crunchy balls of creamy delicious, something or other (they're good, I promise!) .

If you're a donut fan (and if you're not, we may not be able to be friends) Guru Donuts is a must.  Every Tuesday at 10 a.m. and 10:30 a.m. they have Tasty Tales Storytime.  A 20 minute story time session put on by Rediscovered Bookshop, a great book store located across the street from Guru Donuts.

For the more savory breakfast types, Even Stevens makes a fantastic breakfast burrito fixed with tater tots and a fried egg.

I also have to mention another little gem of a place that I discovered on accident while waiting for my tires to be replaced called Txikiteo (pronounced, Chee-kee-tay-0).  This place has breakfast, lunch and dinner and is also a wine bar serving a modern take on Basque cuisine.  I loved the breakfast, loved the coffee (it wasn't late enough in the day for me to try the wine, otherwise I would have had more than one glass for sure) and the staff was extremely friendly.  I really wish I had more time to visit this place because I feel like I would quickly become a regular.

Last and not necessarily least, I have to mention Westside Drive-In. Guy Fieri has been here, so it has to be good right? It was here that we discovered an Idaho staple known as steak fingers.  These are chicken fried pieces of steak, like chicken fried steak, only the size of your finger instead of the size of your head like they do it in the south.  Jamie's most favorite guilty pleasure is chicken fried steak.  He will order it anywhere it shows itself on a menu (and then report that it wasn't really that good after finishing it, EVERY SINGLE TIME... but that's a different discussion).  How were they you ask??  I thought they were pretty good actually.  Mainly because the steak was good quality meat unlike every other southern version I have tried where the steak itself is shoe leather quality at best.  How did Jamie feel about it? You guessed it, "they weren't really that good", surprise!!

If you find yourself in downtown Boise be sure to take a stroll down Freak Alley, a block of the downtown area filled with street art from local artists.  It is the largest outdoor mural gallery in the Northwest.  It's very cool and we found ourselves drawn to it more than once.

Homeschooling started for us the week we arrived in Boise so we decided to visit some educational spots.  We loved the Boise State Capital building.  The employees were super friendly and gave Quinn and I a tour of the main vault in the State Treasury office. Be sure to ring the bell out front, but beware, it's extremely loud.

We also had a great time at the Idaho Botanical Garden.  Bring a lunch and a blanket and sit down in the middle of the Japanese gardens under the big oak tree. It's beautiful and there are some squirrels that live there which will keep you entertained!

Overall, we really enjoyed ourselves in Boise. It's booming right now and is apparently the fastest growing city in America at the moment.  I have a feeling this city is going to go through some major changes over the next 10 years as people continue to migrate here.  Like Portland, the Boise natives are not too fond of the Californians since they seem to be the fastest growing population of people taking over their city.  So if you're from California you may have some fitting in to do.  Start with being way nicer than your typical Californian, say hi to people as they pass by and engage in chit chat (but avoid letting them know where you are from right away).